And now these three remain: faith, hope and love.
But the greatest of these is love.
I Corinthians 13:13 NIV

The old song “By the Light of the Silvery Moon”  hadn’t been written in 1905 when THE CALLING OF ELLA MCFARLAND begins. It appeared as sheet music in 1909, and Ada Jones recorded it for Edison cylinder in 1910.

But the subject of the lyrics has been around for a very long time, a phenomenon as old as life itself, yet one that forever has stumped sages and philosophers: love.

Who can explain love? Kings, wise men, and bards have tried. (Tweet That!)

Who is this that appears like the dawn,
fair as the moon, bright as the sun,
majestic as the stars in procession?
Song of Songs 6:10

There are three things that are too amazing for me,
four that I do not understand:
the way of an eagle in the sky,
the way of a snake on a rock,
the way of a ship on the high seas,
and the way of a man with a young woman.
Proverbs 30:18-19

Love is a smoke raised with the fume of sighs;
Being purged, a fire sparkling in lovers’ eyes;
Being vex’d a sea nourish’d with lovers’ tears:
What is it else? a madness most discreet,
A choking gall and a preserving sweet.
William Shakespeare, Romeo and Juliet

Lovers around the world express their love in myriad ways and locales. (Tweet That!) A couple in London strolls along the Thames holding hands. A pair in Venice snuggles in a gondola. Others pick cherry blossoms in Tokyo. And still others hike the mountain to Christ the Redeemer monument in Rio de Janeiro.

Expressions of Valentine love vary in the extreme. If like my father you were the six-year-old son of a dirt-poor farmer in the Panhandle of Texas in 1920–or his mother–you would have used whatever you could find to make a valentine for someone you loved. 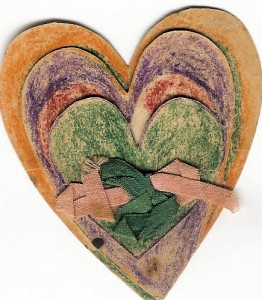 Holidays have come and gone over time. Feast days and memorials have risen and declined in importance. But the day that celebrates Love remains. (Tweet That!)

One element lovers have experienced in common from the beginning of time is the moon.

Sometimes silvery; other times golden, the moon oversees declarations of affection and the pain of break-ups. It spies a bashful tuck of a chin; a halting, tentative first kiss; and a bold embrace by an unrequited admirer.

God put the moon in its place and set Adam and Eve, the first lovers, beneath it. (Tweet That!) He designed the moon not to produce its own light but to reflect the light of the sun. And the moon’s silvery glow has reached down and caressed countless couples in love ever since. (Tweet That!)

But human beings’ tendency to worship the created rather than the creator has distorted the moon’s beauty for some. (Tweet That!) The Lord warned His people that this tendency would lead them to destruction:

And when you look up to the sky and see the sun, the moon and the stars—all the heavenly array—do not be enticed into bowing down to them and worshiping things the Lord your God has apportioned to all the nations under heaven.
Deuteronomy 4:19

February 14, 2016 can be a day of God’s Love or one distorted by The Fall. It can be a day in which the light of the sun is worshipped over the Light of the Only Begotten Son. Or one in which His Light brings all things into perfect focus. Valentine’s Day can be a night when, beneath the moon’s silvery glow, lovers thank God for the love they share (Tweet That!) or one in which they bow to worship the created over the creator, the universe over the Trinity, the finite over the infinite.

Lord, all we truly need is love, and You are love. Help us seize the opportunity afforded us in Valentine’s Day to express the love we feel in our hearts–the very essence of You. Grant that when we celebrate love by the light of a silvery moon … or a single candle … or a noonday sun, we will remember Who is Love and Whom we need above all else. For Jesus’ sake. Amen.

2 thoughts on “The Light of the Silvery Moon”