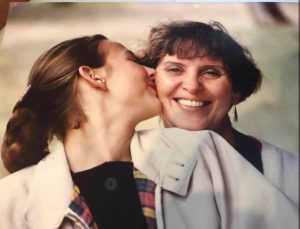 This week I break from the subjects of estrangement and reconciliation to honor a friend I and many others lost recently. How appropriate that cancer endurer Carol Hile’s memorial service was held in February, the month for love. If anyone knew love up close and personal, it was Carol.

I first met Carol in 1992. As a shattered divorcee, I was looking for a church home where I could come to terms with the stark reality of a former husband who no longer wanted me and two teen-aged children battling their own brands of darkness. I was living with a version of PTS and didn’t understand what was happening to me. I only knew I needed the Lord and craved acceptance by other Christians.

I grew up in the ’50s and ’60s when social mores were different from today’s. Marriages in the church rarely ended in divorce, so when I divorced in the ’80s, I knew I would be an anomaly in my current church as well as those I had attended over my lifetime. It’s not that anyone outwardly ostracized me or were unkind, but I no longer could claim the same footing. No more teaching Bible class, for sure. And I felt completely unworthy.

Until I entered Oak Hills Church of Christ in San Antonio in 1992, thirty years ago. (The church is now Oak Hills Church.) I had moved to a new city. New job. A small, one-bedroom apartment. A new church down the street. I hoped for a new lease on life. Still, driving into the parking lot and finding a spot, then walking toward the double front doors, not with my husband and children beside me but alone, the suppressed feelings of unworthiness and failure—reproach, to be honest—raised their ugly heads. I almost returned to my car and drove away.

Thankfully, I didn’t. People in the foyer were friendly, but in the auditorium itself I encountered “aloneness” again. In former days, I and my own little family would have sat on the fourth row from the front on the left side. But that was then. And this was now. I would sit at the back where no one would notice me, and I could slip out when the service concluded.

But Carol Hile had a different idea.

Carol greeted me in the center aisle and in her sweet, loving way led me closer to the front and invited me to sit with her. Her pastor husband Pat was busy during the service, and her two children were with their youth groups, so I took the place beside Carol. Right away, she made me feel welcome and introduced me to her lady friends. She also invited me to the Life Group she and Pat hosted in their home. I confess I was unable at that point to venture that far into relationships, so it took me months to walk through their door.

Meanwhile, I continued to struggle with my battling emotions, even gave reconciliation with my husband another try. But it wasn’t to be, and on the day he drove away, I entered the hospital for major, double surgery. I was alone in my hospital room. My two children were pursuing their educations elsewhere, and I had yet to develop a circle of friends. I called my brother and sister-in-law, and they insisted I go to their home when I was discharged so I wouldn’t be alone during my recuperation. But the five days I would be in the hospital seemed to be a dark, dank tunnel.

My ex-husband dropped me off at the hospital’s admitting door and drove away. After I checked in and entered my room, I realized how alone I was.

But then I remembered Carol.

She was stunned that I was facing two major surgeries completely alone. We prayed together, which took a bit of the edge off being wheeled into surgery with no family beside me. Waking up from surgery was crazy, as it always is, so I didn’t know the difference. But then they wheeled me into my room and transferred me to the bed. I was barely awake, going in and out, but remember noticing that no family member sat in the chair across the room. Only the pips and squeaks of machines down the hallway provided company. And I fell asleep.

When I opened my eyes, whose face smiled down on me? Carol’s, of course. There she stood beside my bed like an angel. But my eyelids were far too heavy to remain open, so off to la-la land I traipsed. Woke. Slept. And woke again, this time babbling about something or other and Carol laughing. Hard. Who knows what I said during those hours. (She never shared that secret, even with me.) It was either truly funny or so outrageous all she could do was laugh. Soon she had other women from the church visiting, and before I knew it, my room was filled with cards, flowers, and even homemade food. I spent six weeks recovering at my brother’s home in Houston, and when I returned, I moved into a new apartment and couldn’t wait to return to Oak Hills.

Wednesday night Life Group in Carol’s living room was the highlight of my week.

Pat and Carol created a wonderfully warm and welcoming environment in their living room. I felt safe, accepted, and valued. I never shall forget the sound of Carol’s voice: “Come in, Linda. Put your dish here on the table. I’m bringing out the beans now.”

It’s no wonder I was hooked. Love lived under Carol’s roof. She was a masterful seamstress and homemaker, so her handprint was everywhere. But she was also the sweetest, warmest of hostesses. Being around Carol felt as if I’d come home. We became closer and closer friends over the months and years that followed. And when I told her I had had a date with Al Davis, a single man in the church, her face brightened into a giant smile. “Oh. Al is a wonderful man. I’m so glad you’ve connected. He writes the sweetest letters—Oh, come here. Here’s one on  my refrigerator.”

That evening after Life Group, Pat, Carol, and I sat around their kitchen table and talked about this Al Davis I had found. Their—and other members’—assessments of Al convinced me I had found a most unusual, godly man. It was only a matter of time before Al and I were married. Carol helped out at the ceremony and reception, and we two couples continued to be friends for the next thirty years. In fact, we had an annual double-date for twenty years. We met at the same restaurant (and sat at the same table most of the time) on the joint occasion of their anniversary and my birthday until COVID restrictions made it impossible. 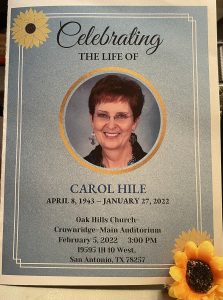 Hearing from Carol that she had been diagnosed with lung cancer came as more than a shock. It was a punch to the gut. She battled the horrid disease for over a year, each and every day praising the Lord and finding joy in His creation. Her smile never faded, and she left her kind and gentle handprint over every person who ever knew her.

Carol said as a girl that she wanted to marry a preacher, and that she did. One year after they married, Pat and Carol headed to the highlands of Guatemala where they worked with an indigenous group, the Quiche people. When she arrived, Carol knew not a word of Spanish, much less the highly unusual Quiche dialect. Her first home had a dirt floor, but that didn’t stop her from making a home where she and Pat welcomed two children—Nathan and Carmen. No flying back home to birth her children in a modern US hospital. To the contrary, Carol bore her babies the way other Guatemalan women did. Together she and Pat led thousands to a saving knowledge of Jesus Christ, and they were instrumental in establishing several churches. In their retirement years, they traveled to Guatemala twice a year to help with home building projects. Now she’s enjoying a landscape where Jesus is preparing homes for His loved ones. Hallelujah!

Our world is better, brighter, kinder, gentler, more Christ-like because Carol Bonnell Hile lived. Earth has lost an angel, but she’s been added to Heaven’s roster. Carol’s love was true. I Corinthians 13 describes her love. I miss her today, and I’ll miss her tomorrow. Until Heaven …

Dear Lord, Make me an instrument of Your peace, as Carol was.
~ For Jesus’ sake ~