When the Lord your God brings you into the land he swore to your fathers, to Abraham, Isaac and Jacob, to give you—a land with large, flourishing cities you did not build, houses filled with all kinds of good things you did not provide, wells you did not dig, and vineyards and olive groves you did not plant—then when you eat and are satisfied, be careful that you do not forget the Lord, who brought you out of Egypt, out of the land of slavery.
Deuteronomy 6:10-12 NIV

Like the Hebrew children of old, our nation’s forefathers arrived on the shores of this great land knowing not what they would find nor what the future held but in Whose Hand their future rested. I imagine among the Pilgrims’ devotions was the 6th Chapter of the Book of Deuteronomy which contains the great Shema, recited by Hebrew children of God for millennia, as well as The Greatest Commandment for followers of Christ:

Faith like our forefathers’ was required for the dire circumstances that overtook them: starvation, exposure, illness, and death. Yet survivors who held their persistent faith in firm grasps birthed legacies for their offspring who in due time created a government based on a Constitution rooted in God’s natural law of personal freedom.

That kind of legacy has been handed down in my family.

I never knew my great-grandfather, George Eben Hancock, but I knew well his daughter, my grandmother Ona Mae Hancock Brooks. He left his mark on Grandmother. He was the song leader at the Liberty Missionary Baptist Church near Memphis, Texas, and she sang alto in the strongest voice and with the truest tone I ever heard. He defended the Gospel like a guard dog, and Grandmother did the same. From 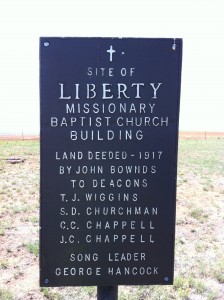 him she learned to make-do with what she had, to put hearty, home-grown fare on the table, to bake bread, and to make stubborn soil produce three meals a day for her siblings.

Grandmother watched her father make a life as a single parent on a farm where the sun baked and the wind chapped and the soil demanded a will of iron. (Tweet That!)

Great-Grandpa’s wife, my great-grandmother Ida Leora McFarland Hancock, suffered from a form of mental illness described at the time as “intermittent mania.” Probably bipolar disorder, a condition that could be treated today but in 1900 it resulted in commitment to a mental asylum. In Great-Grandma Ida’s case, the commitment lasted 48 years.

Ida’s daughter Ona was 11 years old when her mother went away and never returned. As the eldest of four children, Grandmother took on the household duties and helped her father rear her three siblings. She grew up as a strong woman overnight. (Tweet That!) 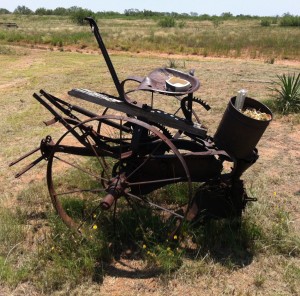 for his four children. He settled in Hall County on the High Plains of Texas where the air was dry, the temperatures scalding, and the soil composed of stubborn sand. (Tweet That!)

First order of business: water. Near the Prairie Dog Town Fork of the Red River, he located the spot and began to dig.

Great-Grandpa’s well flows today, well over 100 years after he dug it in the hot, sandy soil of the Texas Panhandle. His descendants still farm the land and, like the Hebrew children of old, draw water from a well their forebearer dug.

As George Hancock’s descendant, I’m most grateful for the well of faithfulness he dug. He did not forget the Lord as he guided four children to adulthood with no his wife beside him. I’m proud his name is carved into the church plaque as the song leader. His legacy lives on in great-grandsons who have followed in his footsteps.

Dear Lord, only You are good. We can only strive to be like You. We long to leave legacies that live well beyond our years, but we can’t do it without You. Don’t let us forget You who has brought us out of the curse of sin, and bless us with wells of faith we can leave our children and grandchildren. For Jesus’ sake …