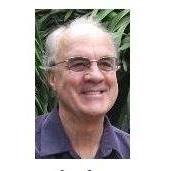 David has led a full, active life that includes stints in the Far East and Middle East. Today, he swims for an hour at the YMCA, three times a week.

Recently, he embarked on novel writing. Elijah, his first attempt at fiction, is intended to show through the life of Elijah, the prophet, how God uses ordinary people.

Please welcome a most interesting guest.

David Parks: The Distant Past

I grew up on a farm in Spring Arbor, Michigan. In high school I played basketball, ran track, and graduated in 1959. After earning a degree in English from Greenville College in 1963, I taught English to college students in Michigan, California, and China.

In 1980, my wife Delphine and I moved to California for Delphine’s lung disease, and I taught computer skills in Vista High School’s Adult Education Department. In the 1980s, Delphine and I lived at Biblical Tamar Park, an archaeology dig in the Aravah.

In time, I edited a church periodical and Living Prophecies: A Crumbling Wall Between Christians and Jews for Dr. DeWayne Coxon, my brother-in-law and the president of Blossoming Rose.

Twenty years of positive influence came from the little band of adults and children who met and discussed the Bible on Sundays in the Valley Center, California town hall.

Delphine died from cancer in 2000. Our friends refused to let me be alone. Every day, one or two or three from the group hung close to me. For example, the ladies who had been holding their Bible study in our home showed up on Wednesdays as usual. “We’re going to keep on meeting here.” It was not a question.

In 2002, I married Vickie, and we worked in China with MSI Professional Services , teaching at Chongqing Technology and Business University and Tsinghua University, China’s premier university.

Life in Israel laid the groundwork for writing about Elijah, the prophet. In 1964, we drove through Gilead, the home of Elijah, crossed the Allenby Bridge, and climbed from Jericho to Jerusalem. At the Mandelbaum Gate we inched across 150 feet of no-man’s-land between dozens of yard-high concrete cones strung with rusty barbed wire. When we pulled up at the Israeli border, my father-in-law relaxed his grip on the steering wheel.

We held our breath as the guard frowned at our passports stamped in Tunisia, Libya, Egypt, Lebanon, Syria, and Jordan.

Dad stepped out of the car and smoothed his clothes. “Sir, Israel is the whole purpose of our trip. We came overland because we can’t afford plane tickets.” He looked straight into the man’s eyes. “You must—please let us enter Israel.”

The guard leaned into the car and studied our faces. Mother and Aunt Beulah in their forties, and DeWayne, Delphine, and me in our twenties. The stamps in our passports came from nations sworn to finish what Hitler started. How much danger did we pose to Israelis? He glanced up at the Jordanian machine guns behind us, stepped back, and waved us through.

Not the Prophet, but the Prime Minister

Like Elijah, we headed into the Negev, but unlike Elijah, we drove Highway 40. We braked at a lonely desert driveway curving in from the east and spoke with the soldier posted at the intersection. 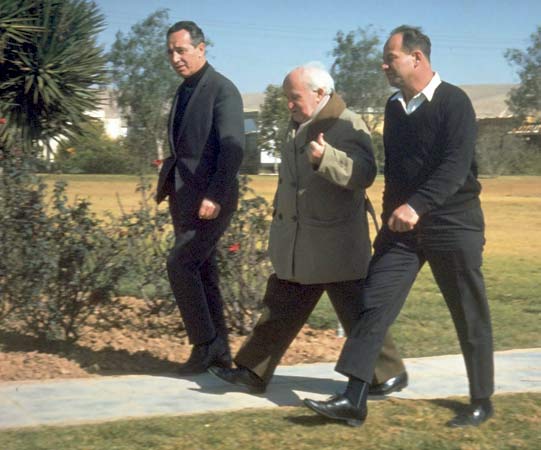 We waited with him and greeted the Prime Minister on his daily walk, but we did not meet the prophet.

Elijah showed up in 2018. During my usual tour from Genesis to Revelation, I read and reread the books of Kings and Chronicles, fascinated with people like Ahab, Obadiah, and Elijah.

Was James 5:17 right? What would it look like for Elijah to be “a man subject to like passions as we are”? How would it work for him to be a normal guy like the rest of us? I began to write my first piece of fiction, to show how the Lord used a normal man in 9th Century BC. The book has 24 chapters in good shape and 35 in rough draft. I hope to publish in late 2020.

From this project come fun questions.

How old was Elijah?

Few men in 9th Century BC lived past 50. So I began the story with the prophet as a brash, headstrong lad of thirteen who pestered three kings during their combined reigns of 36 years.

How bad was King Ahab?

In Israel, each king acted worse than the last. King Jereboam and then Nadab, his son, did evil—as did Kings Baasha, Elah, and Zimri. The historian declared that King Omri did even more evil. Yet Omri’s son, Ahab, built a temple of Baal in Samaria and made an Asherah pole. He “did more to arouse the anger of the Lord than all the kings before him.”

Yet in the worst of us, good wars against evil. Ahab led troops well. He died fighting alongside his men. And he kept friends with righteous Obadiah.

How did Obadiah feed those prophets?

Obadiah held the same title as Joseph in Egypt, who was “over the house of” Pharaoh. If you asked how he hid 100 prophets from the Wicked Witch of Sidon, he would say, “With a little help from my friends—and my wife’s niece.”

Through the American Christian Fiction Writers, a kind soul led me to glorious authors who try to teach me “show-not-tell.” They have gently reminded me that Elijah could not have seen pucks, potatoes, or pineapples. That he did not button his tunic, but tied it, and that a mothball never came near his father’s goatskin.

What surprises has David encountered?

When I asked Google for caves near Jezreel City, it led me to Anat Harrel. The next day she sent links describing caves near Megiddo and Nazareth.

Searching for songbirds in Israel, I found a delightful blog by Shem Tov Sasson.  “Can you please tell me what bird songs might have been heard near Jabesh of Gilead in the time of Elijah?” My new virtual friend replied the next and every day when I ask about birds.

Milkah, Elijah’s girl next door, is named after a daughter of Zelophehad. Iris Wexler gave me permission to post her painting.

What a joy to find generosity in distant strangers! Yet how sad to discover that Moloch priests burned babies, that Asherah temples kept prostitutes, and that an Asherah pole was a phallic symbol. What never came from our village pulpit, Bible commentators and historians describe all too well.

Several readers have remarked how this ancient history parallels modern abortion and human trafficking, and I see the patterns they see. Yet my purpose is not to highlight modern evils, but to show how the Lord uses normal people.

I welcome interactions with readers on Facebook and my blog:

Lord, please bless every word David writes for You.
~ For Jesus’ sake ~