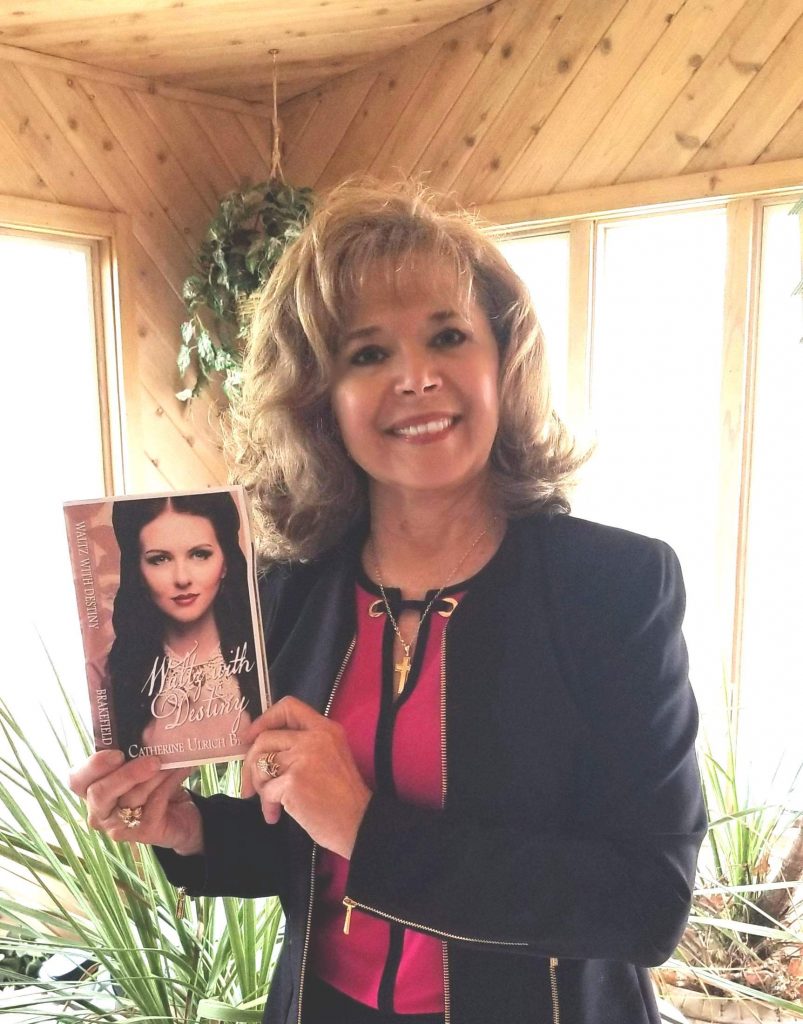 Catherine Brakefield guest blogs for us this week. Catherine is the author of several historical novels and is a delightful person. She’s offering a free print book, winner’s choice, inside the U.S. and a Kindle version outside the U.S.

According to Catherine, “My readers inspire my writing!” I’m looking forward to hearing about her books.

Catherine is an award-winning author of the inspirational historical romance Wilted Dandelions. Her four-book Destiny series is growing in popularity: Swept into Destiny, Destiny’s Whirlwind, Destiny of Heart, and the fourth book of the series, Waltz with Destiny released on June 6, 2019.

Her short stories have been published in Guidepost Books True Stories of Extraordinary Answers to Prayer,  Unexpected Answers and Desires of Your Heart; Baker Books, Revell, The Dog Next Door, Horse of my Heart, Second-Chance DOGS, and Horse of my Dreams scheduled for Fall, 2019 publication; CrossRiver Media Publishers,The Benefit Package and Abba’s Promise; Bethany House Publishers, Jesus Talked to me Today.

A longtime Michigan resident, Catherine lives with her husband of 45 years and their Arabian horses in the picturesque hills of Addison Township.  She loves traveling the byroads across America, and spoiling her two handsome grandsons and two beautiful granddaughters!

The definition of history, according to Oxford Dictionary is “The study of past events, particularly in human affairs.”

You probably don’t consider yourself making history, do you? But you are. Just as my characters did in the Destiny series. What kind of life-history lessons will you make?

In my novel series, my readers are provided with the concrete wisdom of our ancestral Christian foundation. Here are a few samples: 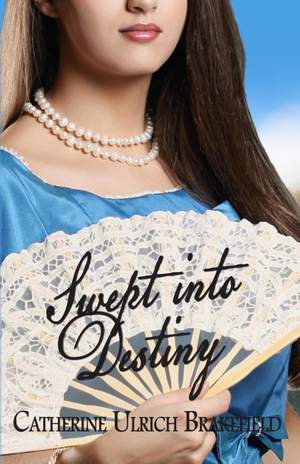 My series begins with Swept into Destiny. It opens during the Antebellum Era with Ben McConnell, an Irish immigrant, who believes he can change the tide of hate and prejudice against his kind. Maggie Gatlan is a rebel disguised in frilly hoop skirts. Beneath the cover of night, she educates slaves and immigrants alike. She lives up to her biblical beliefs and claims Galatians 5:1, “Stand fast therefore in the liberty by which Christ has made us free.”

This story opens in 1898 during the Spanish-American war and the freedom of choice of the Gibson Era.  Daughter of Ben and Maggie, Collina McConnell realizes Rough Rider Franklin Long arrived for just a time as this. 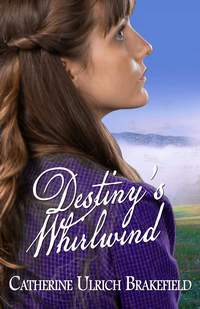 Collina must choose. Ride off with him, or stay and fight for the family farm, Shushan? Her faith often feels as small as that mustard seed Father brought over from Ireland. Ben’s words of Esther 8:6 hold her to the course she must trod, “How can I endure to see the evil that will come to my people?” 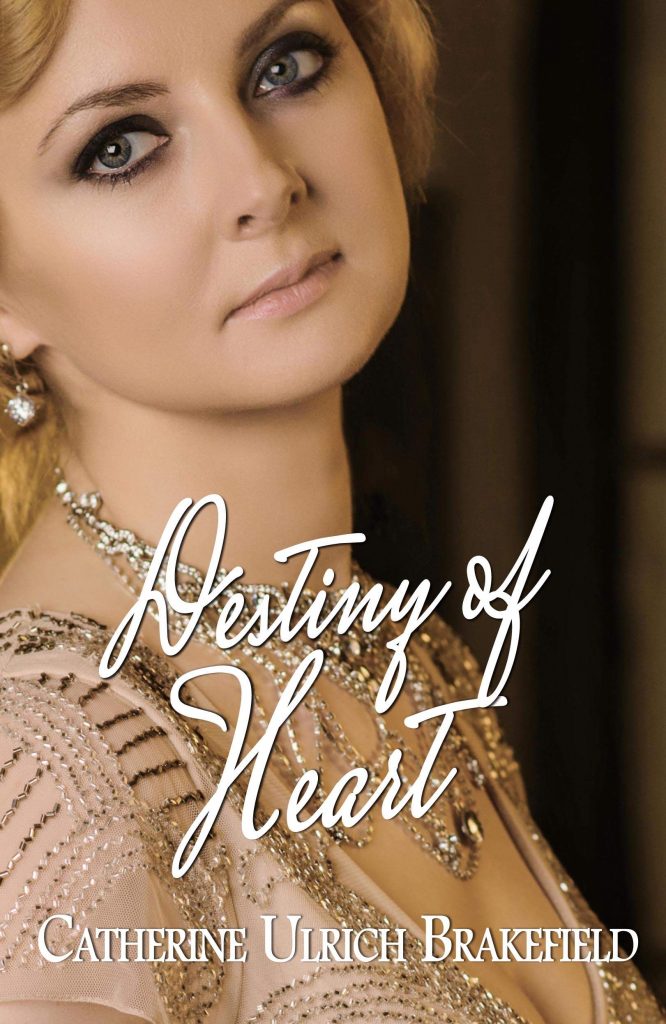 This story awakens with the Great War when Collina’s sister Ruby and her husband, Stephen, leave for the prairies of Colorado. Here Ruby’s second child is born, her daughter, Esther. The Great Depression crashes the nation into its darkest hour. Maggie, Collina, and Ruby determine not to lose hope, claiming Proverbs 28:6,“Better is the poor who walks in his integrity.” Ruby meets a boy following an ice wagon named Eric Erhardt and invites the Erhardts to share their Sunday meal. Unbeknownst to her, God has a plan for Eric and Esther. 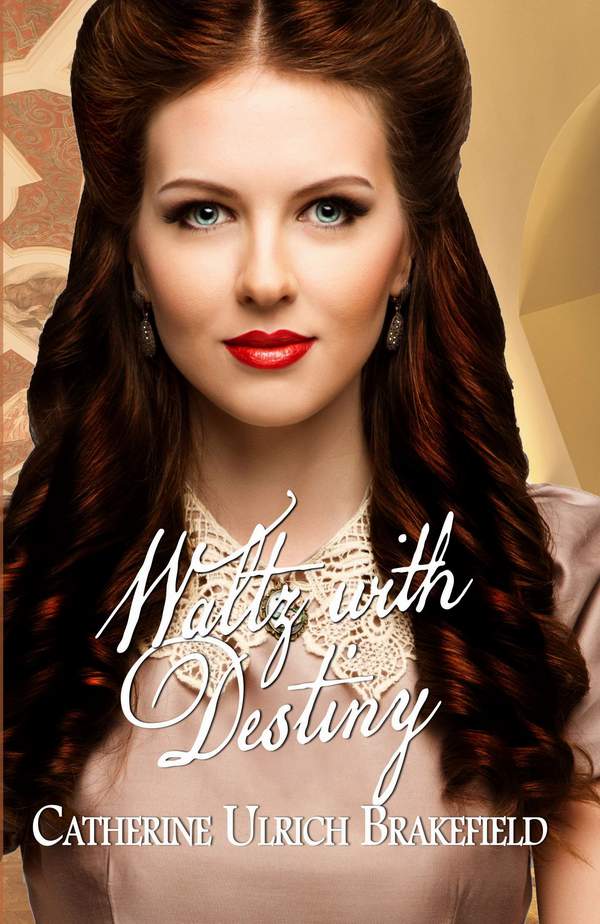 Esther and Eric’s generation walks out of their rags from the Great Depression to stroll into the splendors of a new era. They enjoy the age of automobiles, dude ranches, and the Big Band Era. Ill-prepared, they are thrust into an all-consuming war that rips away the boundaries of countries and eventually thrusts the world into the atomic age.

In Waltz with Destiny, our young men, who were fed on a solid diet of reading the Bible, going to church, and obeying the Ten Commandments, were unprepared to kill. During 1942 there were few victories in the theater of World War 2 for Americans.

So the military asked for help from some well-known celebrities and songs like “Praise the Lord and Pass the Ammunition” became hits to help our GIs over the hurdle of killing their fellow man.

My father cherished his Christian heritage. Entering the service, he was given a small Bible with Theodore Roosevelt’s signature in the inside flap. Prayer tracks of “A Soldier’s Prayer,” “Jesus Help Us,” and “Our Divine Protector,” Dad kept in his wallet throughout his lifetime!

Dad often said, “You’ll never find an atheist in a fox hole.” After describing some battle scene where his buddies died, he’d explain, “Their number was up.” Mom said Dad’s faith grew stronger during those years he fought in Italy.

Dad believed in the Holy Trinity and that God is omnipotent. In Luke 12:20 God says, “Fool! This night your soul will be required of you; then whose will those things be…?”So that was Dad’s practical, no-nonsense outlook about life and death. Worrying about what he couldn’t change wasn’t in his vocabulary. That helped me throughout my lifetime.

The book of James tells us not to boast about tomorrow, James 4:14 “You do not know what will happen tomorrow. For what is your life? It is even a vapor that appears for a little time and then vanishes away.” Dad said his number would come up someday, but hoped when it did, he’d be on his feet when it happened. God complied.

Harry S. Truman once said: “There is nothing new in the world except the history you do not know.”

Waltz with Destiny is the last novel of the inspirational Destiny series. Here is the preface:

When the men and women of World War II marched off to war, they didn’t know what lay ahead. They only knew that upon their young and inexperienced shoulders rested the plight of the free world.

From the corridors of the Great Depression, new heroes from the Old West sprang up, thundering across the talking movie screen to the pounding hoof beats of The Sons of the Pioneers, Gene Autry, Roy Rogers, and Gabby Hayes.

The offspring of the Great Depression, who had peddled papers and sold apples on street corners, awakened to a new era. Across the nation, they gaily glided into the eloquent ballrooms that mirrored the starlight and splendors of the Aztecs.

The American dream awakened our youth to education, jobs, and prosperity. But across the ocean, Hitler was awakening his youth to the idea of a Master Race.

So it was during the twilight of August 1941 a changing wind began to blow against America’s shorelines. Before the autumn moon could chill the summer breezes, many knew the stench of death.

As the lash of Hitler’s Third Reich fell upon Europe, the world looked to America, looked to our happy and fun-loving boys and shook their heads.

Compared to their notable fathers of World War I, these boys were like lions are to kittens. These kids couldn’t deliver the world from Hitler’s new world order. Not these playboys in their baggy zoot suits, not these “Mama Boys” still wet behind the ears. They were no match for Japan’s kamikaze or Hitler’s Nazis. They were too innocent, too young, and too inexperienced for the task.

As far as Japan was concerned, America had produced a carefree generation that couldn’t rescue themselves from a windstorm, let alone the world from a dictatorship.

Guys like Eric Erhardt remember those days vividly. “The outside world all thought Americans were too soft, and not much more than playboys, and we wouldn’t be able to fight—man, did we show them!”

What kind of history will you make to pass onto your children and grandchildren?

How to Find Catherine Brakefield