Teresa Tysinger is an author of southern contemporary romance inspired by grace. She writes on the fringes of being a wife, mom, and full-time communications professional. Her novels Someplace Familiar and Suddenly Forever are the first two books in her Laurel Cove Romance series.

Teresa is a member of ACFW, the Association for Women in Communications, and the Religion Communicators Council. She loves coffee, traveling, and just about every genre of music. Born in Hawaii, raised in Florida, and educated in North Carolina, she now resides in Texas with her husband, daughter, and dog.

Join the chat below, and you’ll qualify for Teresa’s giveaway: Suddenly Forever in ebook format. Now, here’s Teresa Tysinger in her own words.

On Being Inspired by Teresa Tysinger 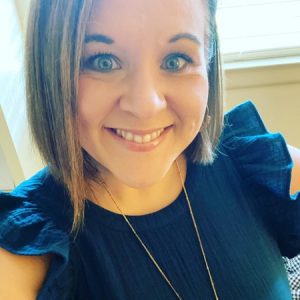 I’ve had readers ask me how I come up with the ideas for my books. Usually, a small detail or general theme kicks off a few weeks of brainstorming. I’m sometimes inspired by a line in a song, a feeling I’m struggling with in my own life, or a scripture verse on my heart. Slowly, characters start to take shape. A setting comes into focus. Eventually, the shell of a story forms enough that I can sit down and begin writing.

I wouldn’t say that I generally labor through a new story idea. As a pantser (an author who flies by the seat of her pants instead of plotting out the whole story), all I need is a general idea of where I’m going and who my characters are. But everything was completely different with my latest book, Suddenly Forever. 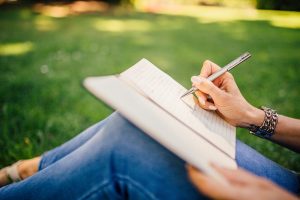 In April of this year, I finished writing Somehow, This Christmas – a Christmas novella for the Something Borrowed: Christmas Weddings Collection (available October 20). The same night I typed THE END on the novella, I laid awake in bed stirring with creative frustration. Vague shadows of a new story floated around in my head like ghostly flecks of snow in the night sky. I couldn’t quite grab a hold of any of it, but it was there. Then, before I knew it, the almost undetectable flurries thickened into a blizzard of ideas.

I tossed and turned as flashes of vivid characters sprang to my mind. They were so complete. Their faces and names, their hurts and mistakes, their deepest desires. It all became so clear so quickly. Scenes played in my head that swelled emotion within me all the way to a conclusion that left me blinking away tears.

This avalanche of inspiration was so foreign and both overwhelming and exhilarating. It was almost as though God was playing me a movie trailer version of a story He wanted me to tell.

Over an hour later, I set my smartphone back down on my bedside table and rested my quiet head on my pillow, finally ready for sleep. My note-taking app would be waiting for me in the morning full of the bits I could collect into phrases, bullet points, and even a few paragraphs. 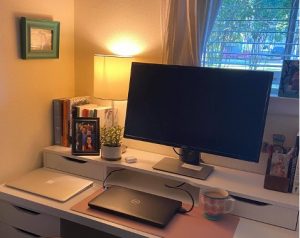 Sure enough, the next day I began writing what felt like an already-complete novel. It poured out of me. Less than six weeks later, I typed THE END on a more complete first draft than I’ve ever had before. (See my writing space in the photo to the right.) And, early last month, Suddenly Forever hit the shelves! It’s been quite a whirlwind.

I have spent a lot of time reflecting on this experience of sudden inspiration. More than ever, it made me acutely aware of God’s role as my co-author. At the beginning of any project, I pray and invite God to be a part of the process. This time, however, God came knocking on my door and invited me alongside Him. How exciting!

I know it won’t always be this way.

Future stories will likely require flexing my creative muscles. Inspiration will hide and I’ll have to chase her through a maze of dead-ends on the way to THE END. Both experiences are valuable in their own way. Both require hard work, determination, and willingness to say “yes” to the task of co-writing with God. And, no matter which way inspiration reveals herself, I trust that my co-author will speak His Truth to readers in new ways.

Still, what a thrill it was to be stuck in the white-out of an inspiration blizzard at least once!

On the outskirts of Laurel Cove, North Carolina sits a quiet lake tucked into gentle mountains carpeted with the brilliant colors of autumn. Grief binds the lake’s only residents into an unlikely family, where old and new love build a bridge between loss and hope.

For years, best-selling author Cora Bradford has worked tirelessly to tread the unrelenting waves of grief in solitude. That is until a new neighbor moves in down the road and threatens to disrupt what she’s carefully preserved of the life she once knew. Will God ever answer her prayer for peace and calmer waters?

Following a scandal, Pulitzer Prize-winning photojournalist Luke Bassett escapes to the one place in the world he’s ever experienced peace—his mother’s cabin on the lake where he spent childhood summers.

But the memory of her and the mistakes he made are hardly peaceful. To make matters worse, he gets off to a rocky start with his bitter, but breathtakingly beautiful, neighbor. Was running away from the life he’s always known the biggest mistake of all, or the beginning of something he never knew he wanted?

Spunky, opinionated, and recently widowed Ina McLean is alone for the first time in over ninety years. When Cora and Luke come together to care for their only other neighbor, Ina’s belief in God’s goodness through life’s ups and downs works to restore their hope in learning to live—and love—again.

Readers can find Teresa Tysinger via the following links:

Lord, please bless each word Teresa writes for you.
~ For Jesus’ sake