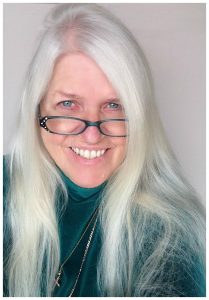 Welcome, readers! As we say in Texas, I knew the first moment I laid eyes on Caryl McAdoo I wanted her as a friend.

How right I was!

Gather ’round as we chat with Caryl Lawrence McAdoo. I think you’ll want her as a friend too.

Before Caryl McAdoo, the Author

What a great opportunity! Though born in Long Beach, California, my parents got me back to Dallas, Texas at six months old, so being a TEXAN is all I know! An only child for eight years might have made me think I was special, at least that’s what all my cousins accused me of.

I went to Letot Elementary in Dallas from the first through the seventh grade. Then we moved to Irving, a suburb and my home for more than fifty years. 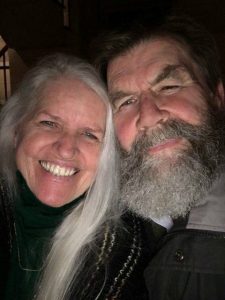 In my sixteenth summer, I met Ron McAdoo and from our first date on, he and I were together, marrying as soon as we graduated at eighteen!

Well, together except for two of the six months we were divorced…we remarried on our sixth wedding anniversary. Added my only born daughter that next year; she had two big brothers. Then when she was seven and the boys teens, God surprised me with another blessing, a third son who just married his beloved October 29.

Writing with my husband began in earnest in the mid-’80s, then first published in ’99 after being mentored by some awesome folks at the DFW Writers’ Workshop.

I LOVE being an author and pray my story gives God glory!

A Debut for Caryl McAdoo

Back in ’98, Ron and I were asked to write a antique guide book for a local, regional press. The best part was seeing McAdoo on the spine!

Though I had nine titles when Simon and Schuster bought VOW UNBROKEN, they counted me a “new” author, and THAT release was exceptionally exciting…the entire process…all the different editors and seeing the cover, holding that book for the first time.

I’d love to give a couple commenters a print copy of VOW as a giveaway. *[Readers, Marilyn R. is the winner of Caryl’s Vow Unbroken!)

Writing is mostly all about sitting at your computer and doing it! (Tweet That!) Keep at it! Keep getting new books out, and you must keep the buzz gong by posting and having contests and attending parties. 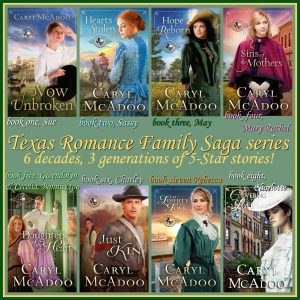 When Simon and Schuster elected not to exercise their option on book two in the series, many writing friends offered their condolences, but I said, “No, no! I’m not upset at all! This only means God has a different plan!” (Tweet That!)

One day after my contractual release, I independently published book two, HEARTS STOLEN. That was in September 2014.   In 2015, wholly with God’s help and blessings and favor, I released eleven new titles and marketed successfully enough to get over 250,000 copies of my stories into the hands of readers all over the world.

When 2016 rolled around, God told me to SLOW DOWN. I want to obey Him since that’s how we show Him we love Him.   But it was like I didn’t know how. It seemed very hard. So I landed up in the hospital three times in the first few months.

Then He sent me on a month long all-expenses paid vacation on a yacht, island hopping in the San Juan and Canada’s Gulf Islands. I did cut back to three releases in 2016 and many, many more new readers—still learning how to slow down!

My advice? Study your craft. The elements of creative writing can be learned, but it is different from most every other type of writing. I don’t think you can learn storytelling. It’s a gift.

If God has called you to write, study to show yourself approved.   Do not rush any step and put out an inferior product. It will only hurt your reputation and writing career. It is HARD to be patient, but those who wait upon the Lord will renew their strength and mount up with wings as eagles! Woo hoo! 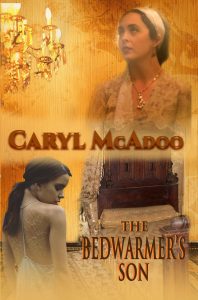 I LOVE being up high! I want to soar in the Kingdom and accomplish every plan He had for me the day He created me in my mother’s womb.   (Tweet That!)

Blessings to you and thank you for stopping by and reading my guest post. Thank you, Linda, for inviting me to come. It’s been a lovely visit because I love you! Linda and I met at ACFW in 2013, that year before VOW UNBROKEN debuted in March. The bonding was instantaneous!

Caryl is absolutely right. Our bond was instantaneous! My head has been spinning the past three years as Caryl has released title after title after title. This girl’s on God’s mission, ya’ll!

Dear Lord, only You are AWEsome. We are filled with wonder in Your presence! Whether reader or writer, knowing we’re on mission with the God of Heaven is beyond every dream or desire. Bless Caryl as she spreads the Good News of Jesus Christ in her stories. Touch the hearts of readers and give us writers more and more of You each day. ~ For Jesus’ sake.

17 thoughts on “Join Our Author Chat With Caryl McAdoo”