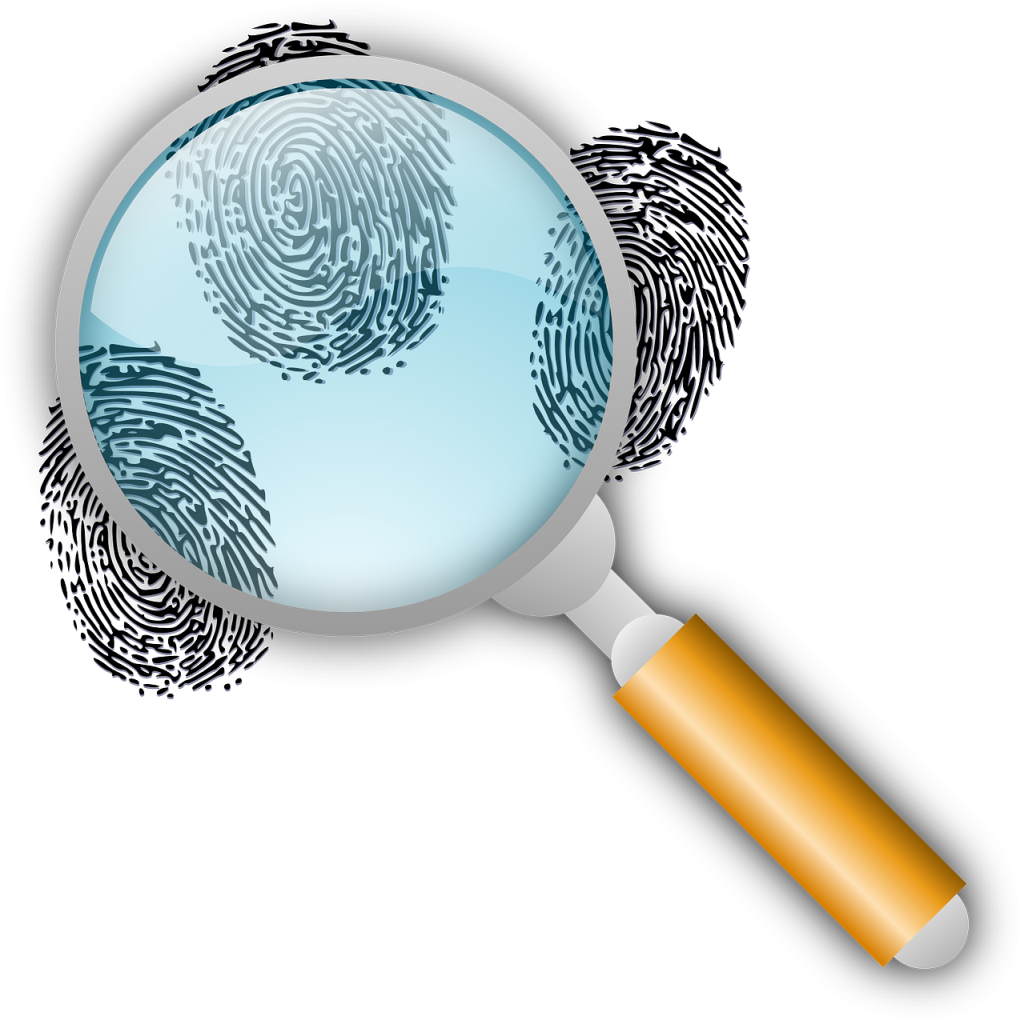 Forensics. Fingerprints. Forget feelings or faith. Follow the blood evidence. CSI fans can tell you all about it.

So can Lee Strobel, the Pulitzer Prize-winning journalist who took a dare to prove Jesus a fake. In his best-selling book, The Case for Christ, Strobel chronicles his nine-year search all the way to the Holy Land and to the conclusions he reached based on the evidence. The movie, The Case for Christ, is profoundly significant on this week before Easter. (My copy is almost 20 years old!) 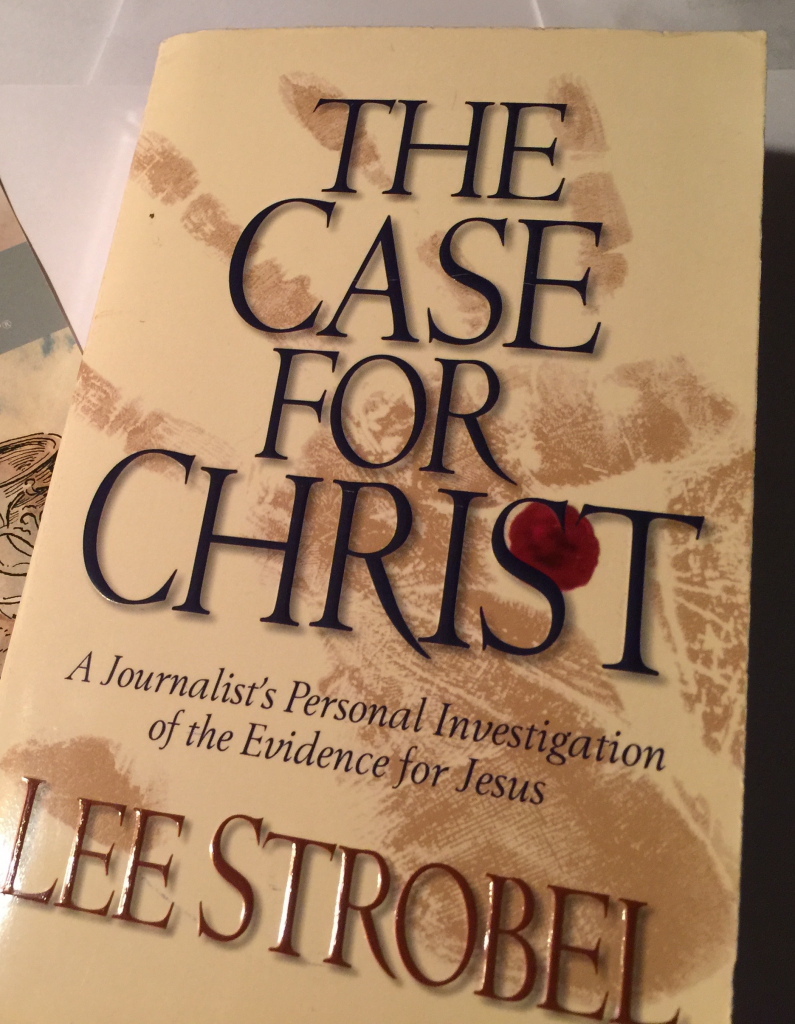 Which got me to thinking …

I chat weekly with fellow authors who’ve been called to write faith stories. But in light of the movie, The Case for Christ, and Holy Week, and–frankly–a Facebook post by niece, Sarah Brooks–I’m taking a detour to pursue a different, and yet similar, path–a trail of evidence somewhat like Strobel’s. I’m looking for faith evidence–the blood and fingerprints kind–in a case involving a 5-year-old child named Wilson Beckett Brooks. 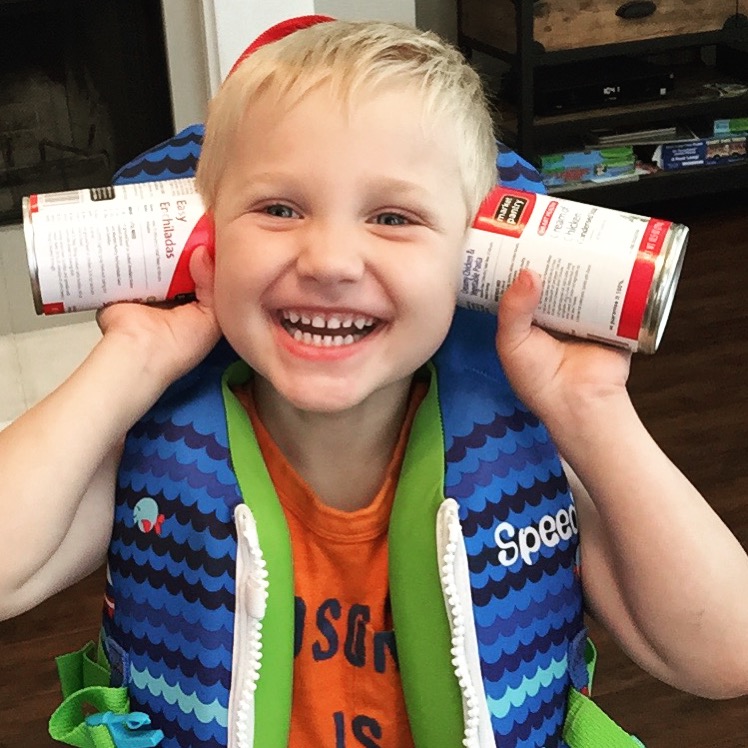 Beckett melts hearts with his unabashed enthusiasm for Jesus–in particular, capturing photographs of what he currently considers the most thrilling aspect of a Christian’s experience, baptism. (You must read his mother Sarah’s blog about it here.) 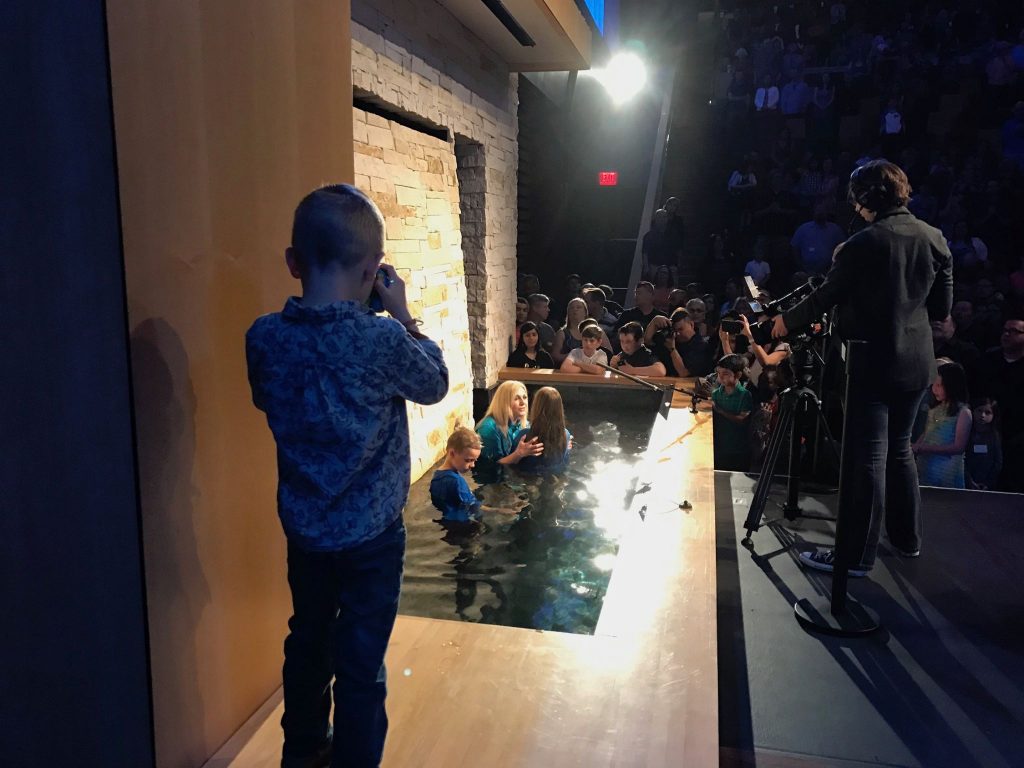 Frankly, his parents–Taylor and Sarah (Sparks) Brooks–have been dumbstruck by Beckett’s exuberance. So have the members of The Hills Church in North Richland Hills, Texas who witness Beckett’s ever-so-faithful snapping of his camera shutter beside the baptistry. (Check it out!) 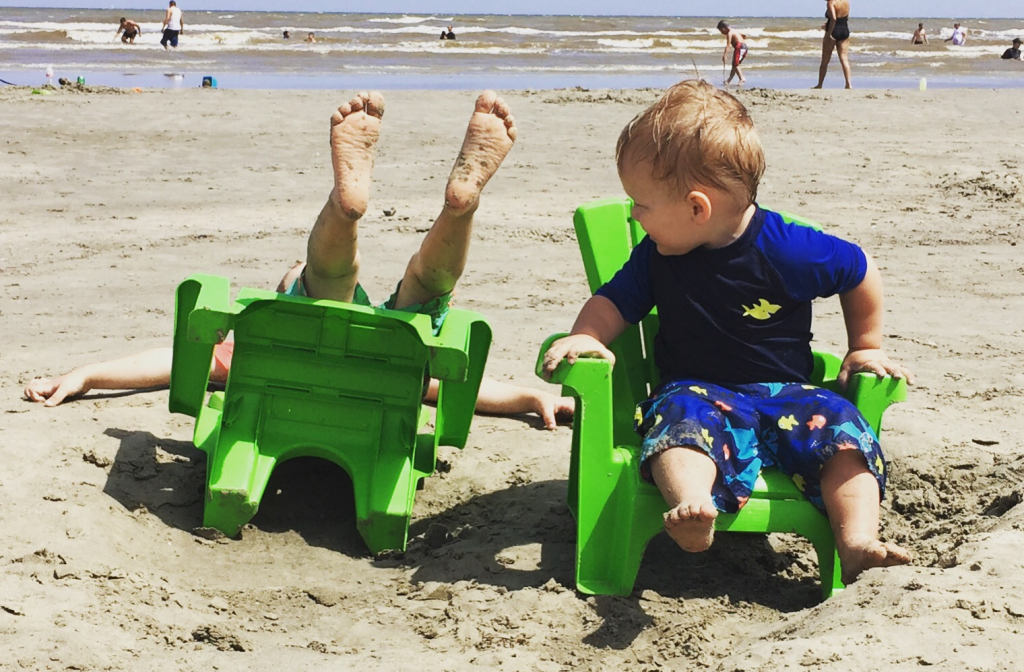 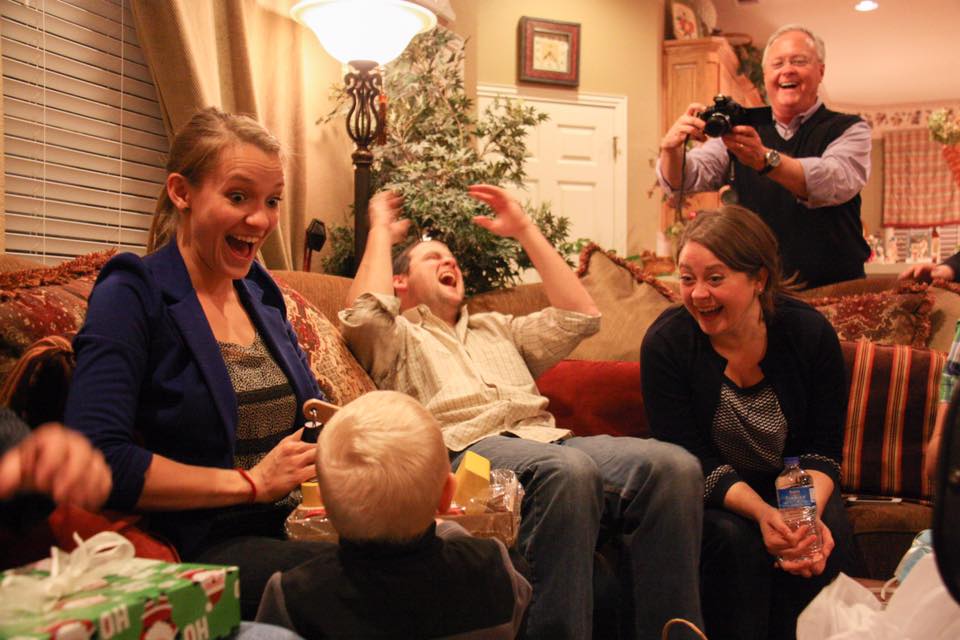 Occasionally I endure a down day. (The picture above does NOT illustrate “down day,” by the way.) My natural tendency is to collapse inward and draw the drapes and crawl into bed and cover my head. But if I go to Sarah’s blog, Life as of Late, I’m dumbstruck to find the truth of Psalm 17:22a (A cheerful heart is good medicine) in a quirky kind of Technicolor. Sarah presents life in the Brooks household in all its realness and zaniness and joy (Check it out!), and tucked into the center is a gem of wisdom. You’re in for a treat here! 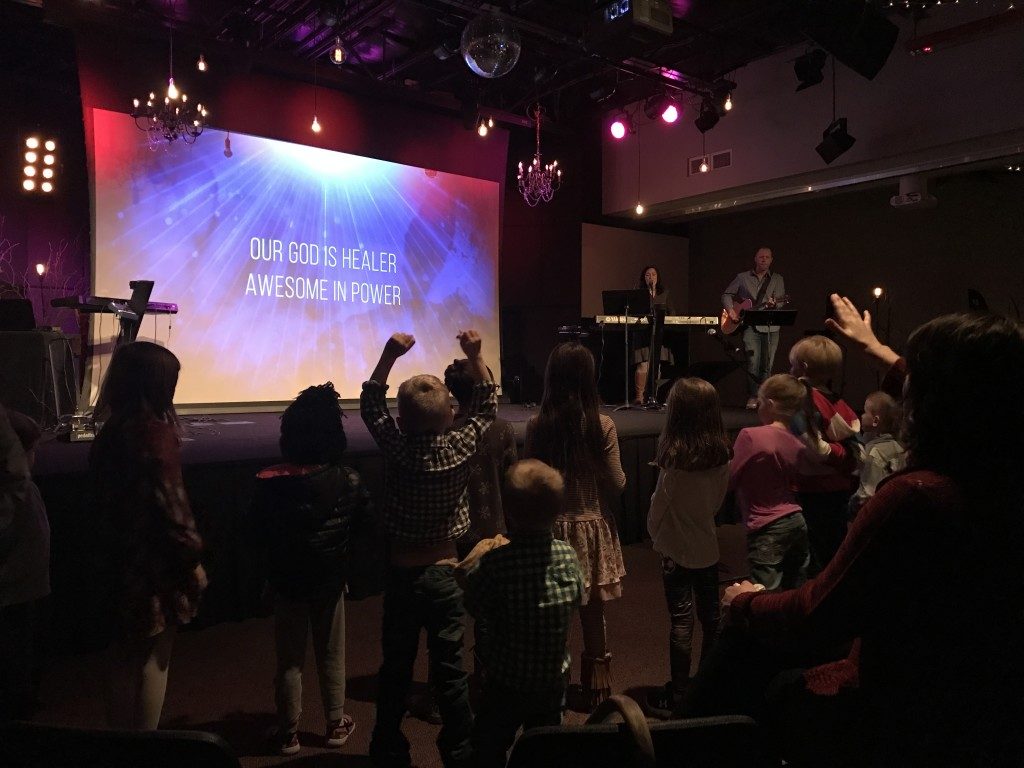 Back to finding faith evidence to explain how 5-year-old Beckett fell so unabashedly in love with Jesus, I put on my CSI hat and discover he’s covered with his mom’s and dad’s fingerprints, but since I’m a Brooks, I’ll examine Taylor’s prints on the Brooks branch of Beckett’s family tree. 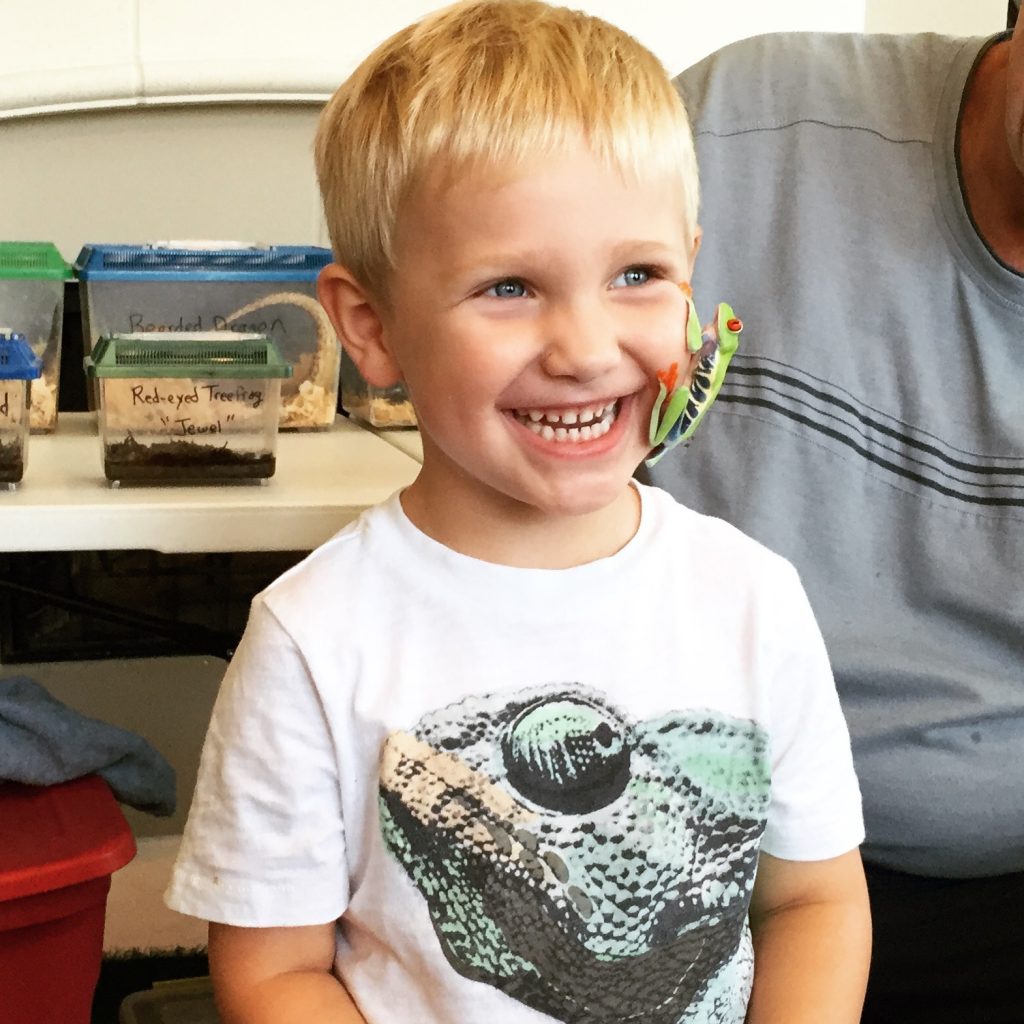 As a bit of a genealogy freak, I could go back ten or more generations, but I’ll begin with the first Brooks for whom I have a photograph: George Brooks, 1872-1936. Did this g-g-grandfather of Beckett’s leave fingerprints anywhere? Let’s see … 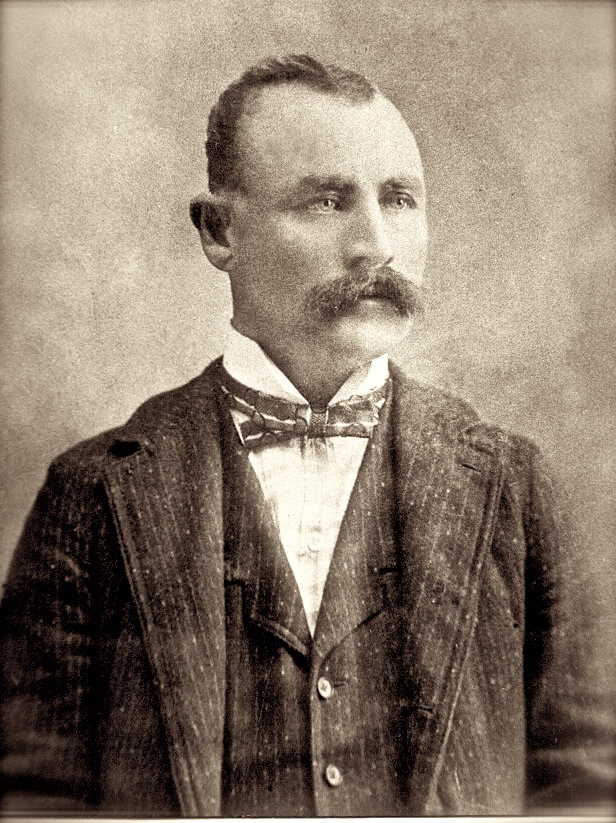 My grandfather, died before I was born, so I have secondhand knowledge alone, but it’s reliable–the testimony of my father, George’s son, and my mother, George’s daughter-in-law. To say the very least, George Brooks exuded enthusiasm for the Gospel of Jesus Christ. He preached it through his gift of song.

My mother, one of the congregants who “experienced” George Brooks firsthand, was mesmerized by his voice and his ability to draw folks into the song service. Not one to take no for an answer, Mr. Brooks folded his soft-sided song book into a roll and beat the 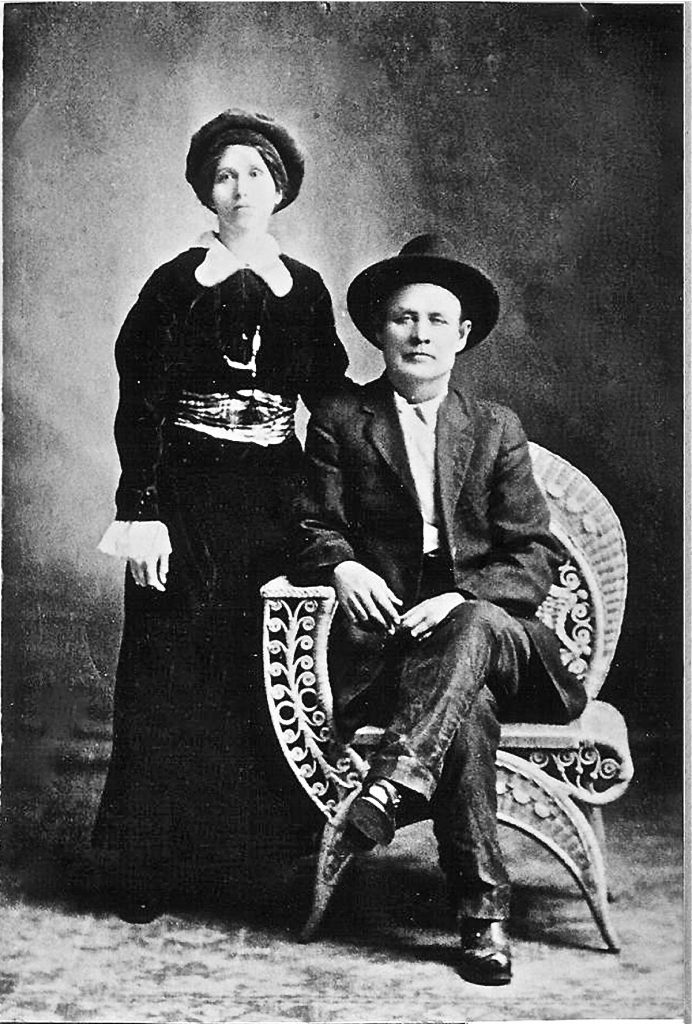 rhythm on the palm of his other hand. Oh, George Brooks wasn’t content to stand at the front with a song book in one hand and the other raised, counting out the beats ever so methodically. No, he walked up and down the aisles as he sang and called on the silent ones to join in. “If you can talk, you can sing!” Mr. Brooks would declare, and he meant it. (Tweet That!)

I know Wilson Freeman Brooks‘s fingerprints firsthand. The greatest honor of my life–aside from God’s grafting me into His family tree–is calling Wilson Brooks “Daddy.”

Daddy was born the second son of George Brooks, a man who could get anybody to sing but couldn’t seem to make a decent living. Dirt-poor but faith-rich, they struggled on the Texas Panhandle, but the crucible of poverty produced Daddy, a great man by all accounts.

A home and family of his own

Wilson Brooks and Goldie Banks married in 1935. He was earning $5 a week as a farm hand. They lived in little more than a shack Mother considered a palace since she was living in a barn when they married. Daddy taught his first Bible class when he was 21, and he never stopped. Matter of fact, he taught a class–from his wheelchair–just days before he died. 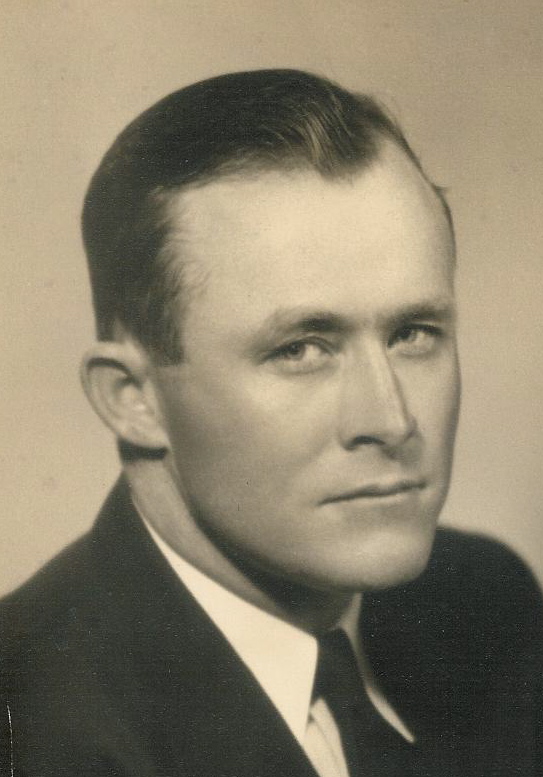 More reserved than his father, Daddy could lead the singing like nobody’s business, and folks joined in. A real treat was when he sang in a quartet, always the tenor part. And–oh–the precious memories he and Mother created in our family-and-friends circle, singing faith. (Click below to listen to our sibling acapella quartet using shaped notes at Mother’s funeral.) 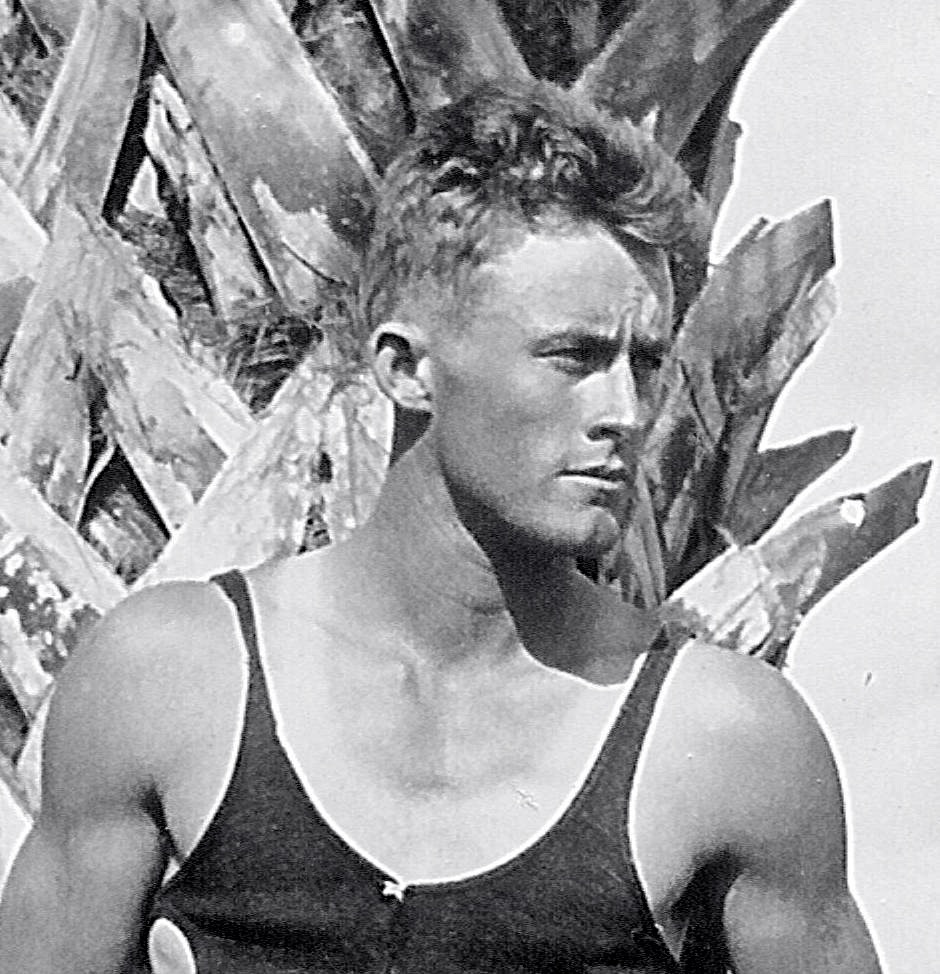 A fine physical specimen as a young man, Daddy developed his muscles not in a gym but by plain ol’ hard work. As a farmer he knew his work never really ended. There was always something that needed doing. But nothing got in the way of church–not a cotton crop or even a flood so severe he had to put his family into a farm trailer and pull it by tractor over the water-covered dirt road. Sunday morning, Sunday night, Wednesday night, and every night of Gospel meetings, Daddy showed up with his family, Bible in hand, ready to 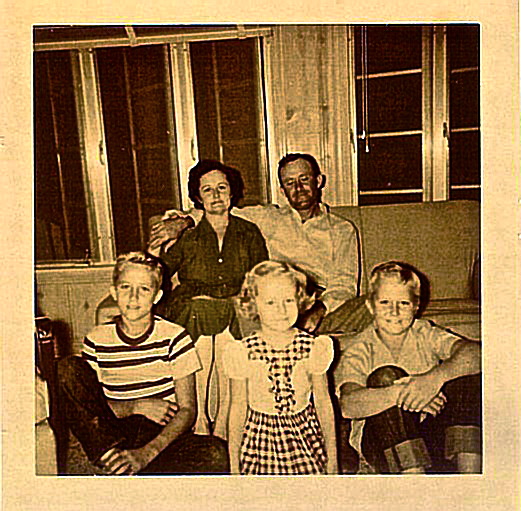 teach a class, lead a song, or even take the preacher’s place in the pulpit. I couldn’t count the times he–rather than the preacher–was called on to counsel someone, to lead a sinner to Christ, or to understand some theological or doctrinal point of Scripture.

Fingerprints of a Father

I still see the golden glow of the ceiling light over the kitchen table and Daddy sitting there with his Bible, sometimes alone, other 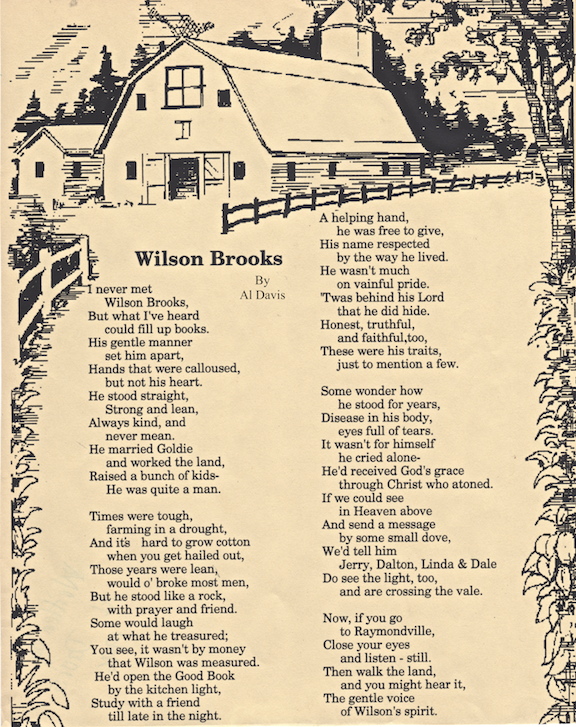 times with his children or a friend, excavating God’s Truth. And at church, welcoming visitors and encouraging folks out front after the last Amen.

Proud of his family? And devoted? No one surpassed Wilson Brooks. In love with God’s Truth? No one fell harder than Wilson Brooks. Oh yes. Wilson Brooks’s fingerprints are all over the place, but nowhere more clearly etched than on his son, Dale. 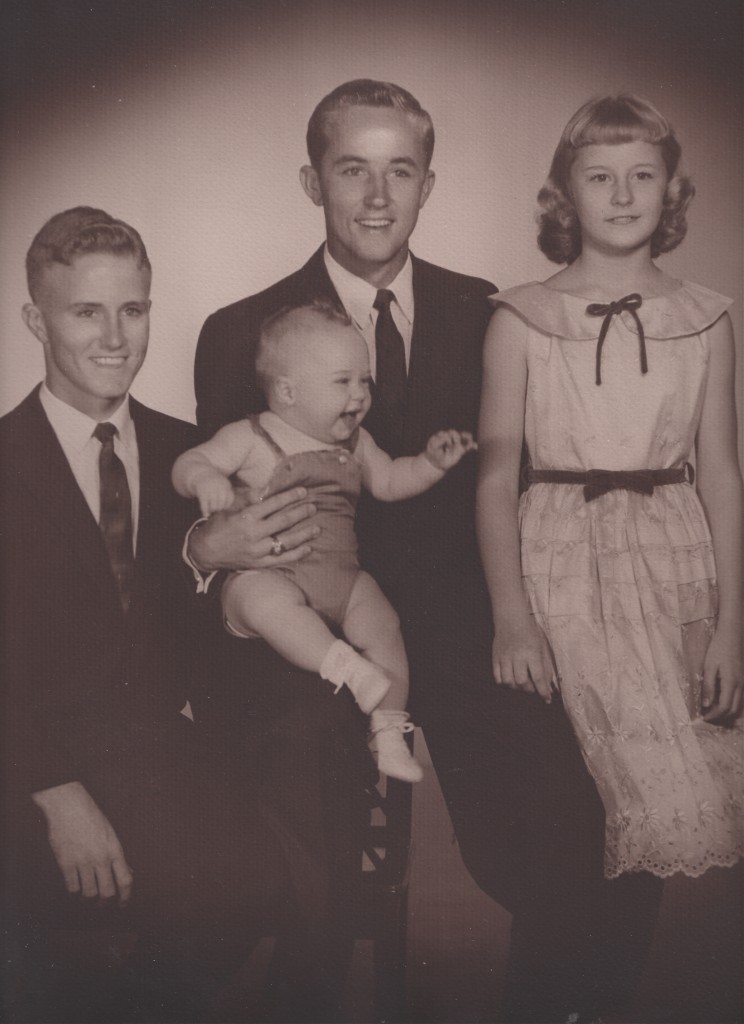 Dale was a late-in-life surprise for Mother and Daddy. With children ranging from 19 to 11, the birth of another son was almost more joy than Daddy could contain. I never shall forget how his face beamed with joy the day they told us a baby was coming. Dale was my baby doll. I dressed him up and rocked him and fed him and even tended him when he came down with chickenpox.

Unlike his three siblings, Dale never knew Daddy as a man with physical strength. You see, our father was stricken by an undiagnosable muscle malady similar to ALS when Dale was a 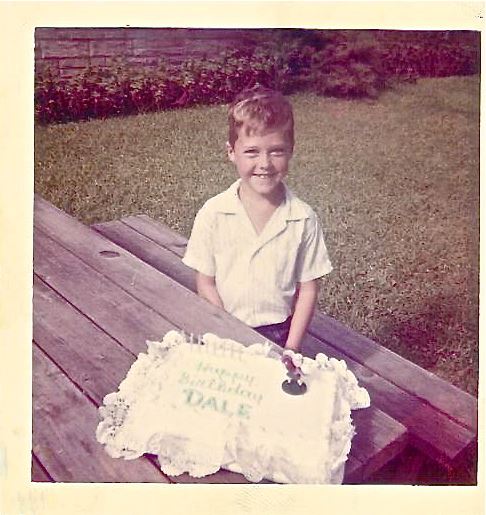 preschooler. As the rest of us headed off to college and married life, Dale grew up chair side and bedside by Daddy, talking with him, helping dress and feed him, and driving around “the fields” to check on the crops.

With a father confined to home and then burying him when he was 14, Dale never enjoyed Daddy’s wholehearted pride and joy over his high school athletic and academic successes. He never knew what his brothers and I experienced–a father who chaperoned events, traveled on buses with them, and applauded their extraordinary accomplishments–but he did benefit from the best of Wilson Brooks–his love and enthusiasm for the Truth of God and Jesus, God’s Son, even in the worst of his physical trials. 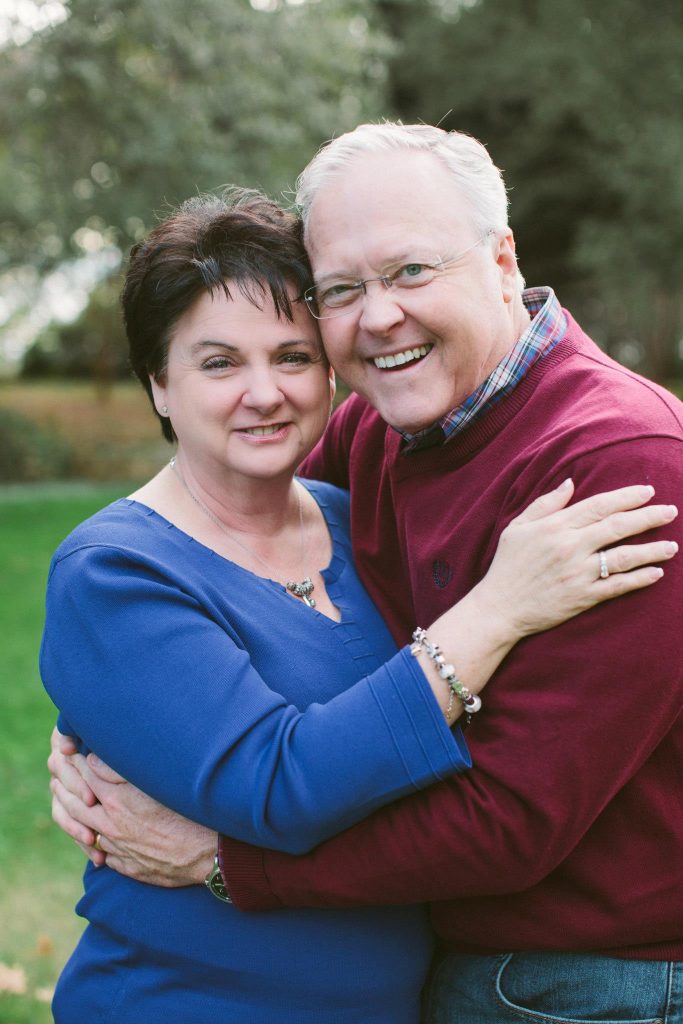 Emerging from his personal crucible at Daddy’s gravesite and along lonely rows of cotton and sugar cane, Dale followed in his father’s footsteps. He set his sights on Jesus. He had the good sense to marry Cherie Vess in 1978 and, like his father before him, dedicated his home and family to God. Fingerprints? Oh, you bet. Dale has left fingerprints on his daughters, Evy and Ellen, and his son, Taylor. 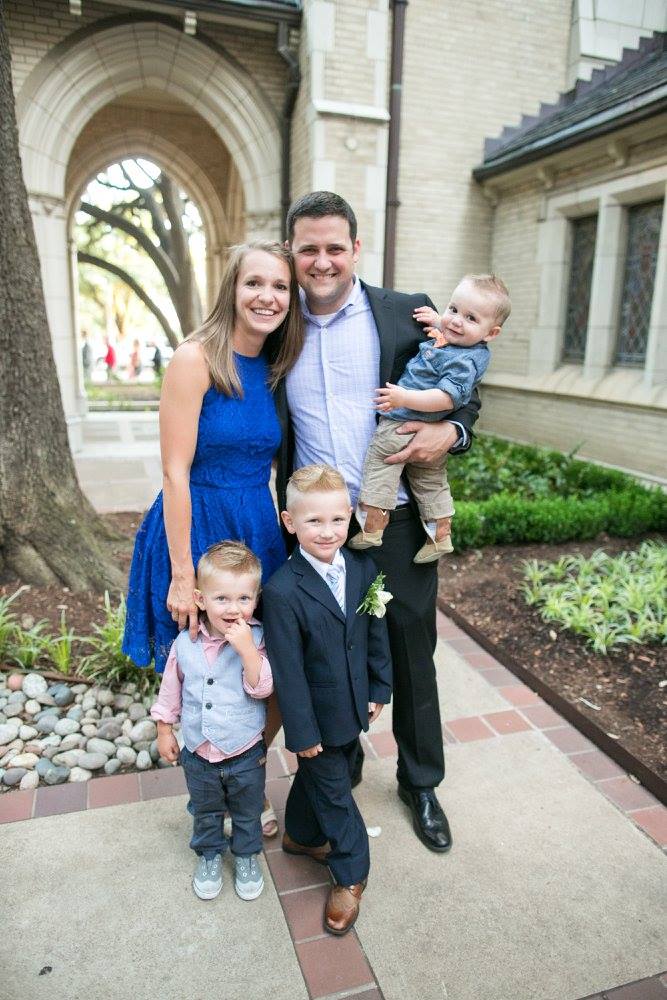 With two older sisters, Taylor was born the sole male twig to bear Daddy’s name for future generations. As smart and kind and good and Truth-and-family loving as his father and grandfathers before him, Taylor has established a home where Jesus is the heart, the dead center, of his family, and has shown himself to be worthy in every sense to wear his grandfather’s name.

All of which brings me back around to Taylor’s firstborn son, Beckett Brooks, and his camera. Check out Sarah’s Facebook post about Beckett’s latest gig as his church’s newest “official” photographer. Beckett’s love for God’s Word (and his mother’s fun-filled guidance) here. And the little boys he’s big brother to here. 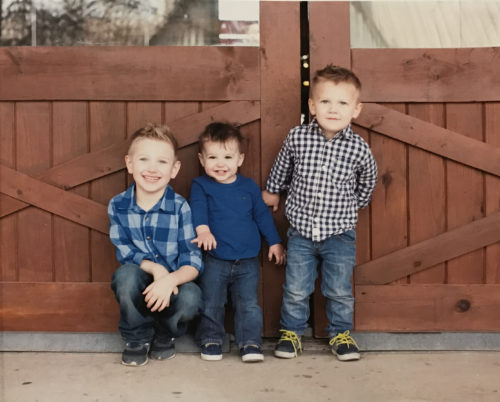 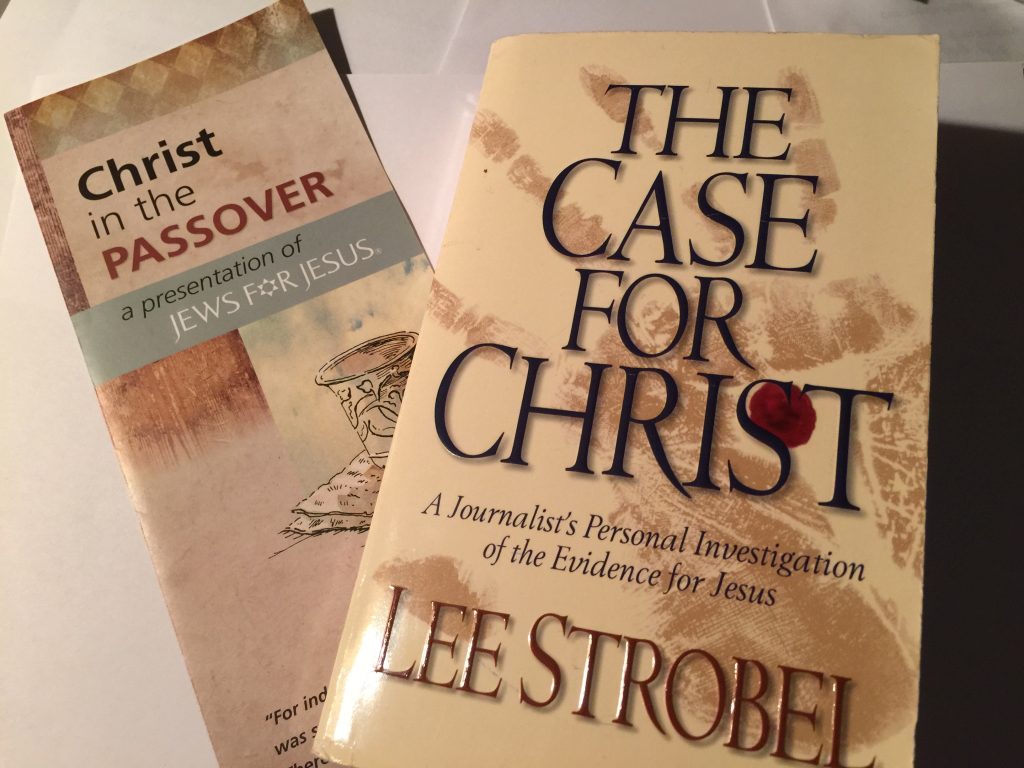 Oh … about that blood thing. Sure enough, I found blood evidence in my investigation. It’s called “bloodline” or DNA on Ancestry. But in the Bible, it’s the blood of the Lamb. I’m with Beckett on this one. Get out your camera, folks! It’s time to celebrate!

P.S. Thank the Lord for Beckett Brooks and his faith! 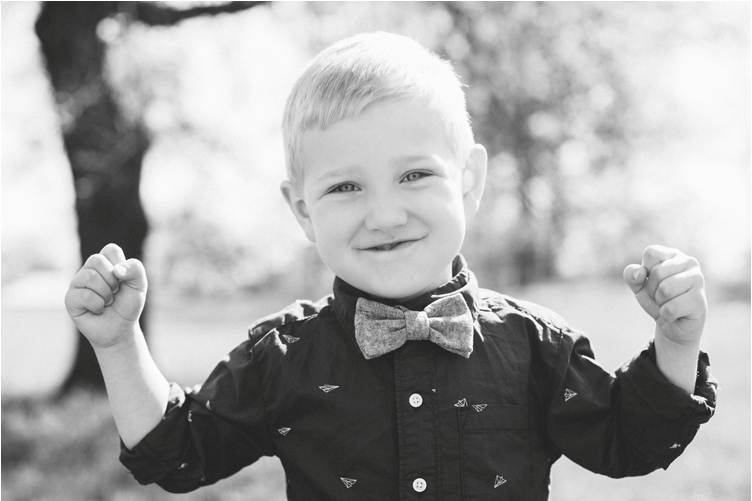 6 thoughts on “The Forensics of Faith (Sort of)”