This article about unexpected joy first appeared on May 13 on the Seriously Write blog. For those who did not see it then, here ’tis  again …

Miss Colombia, Miss Philippines, and I have next to nothing in common—not hair color, body shape, facial features, age, heredity, ethnicity, residence, or life experiences—except one, in an eensy-weensy way.

I, a 70-year-old grandmother, and those two goddesses have shared a this can’t be happening moment. Theirs occurred at the Miss Universe pageant last December when Steve Harvey announced Miss Colombia was the new Miss Universe … and then had to admit he’d made a mistake. The crown went to Miss Philippines, not Miss Colombia. Whooops.

Watching that unwatchable yet can’t-take-your-eyes-off-it moment transported me back to January 2015 when I received word my Operation First Novel entry—THE CALLING OF ELLA MCFARLAND—had won first place. I experienced unexpected joy … and a few more emotions.

My first words: “That’s impossible.” (A few months prior when I learned my entry had made the list of 11 finalists, I had told my husband it was a good thing the list didn’t end at 10 or I wouldn’t have made it.)

I expected something akin to the words poor Miss Colombia heard: “I’m so sorry but there’s been a mistake.” Any minute the Whoops call would come. Surely. But the clock ticked away what remained of the evening and the phone sat silent while I worked my way through believing the unbelievable.

The unexpected joy experience was traumatic—in a good way—but traumatic, all the same. I’ve read that when a person experiences trauma, the needle in the brain’s “trauma center” goes “KERBAM!” all the way to “Full” and beyond. That’s true.

My tank—or cup if that suits better—ran completely over. (Tweet That!)

I couldn’t wrap my head around such unexpected joy. I wept. And wept some more. Around 11:00 p.m. my husband asked if I was going to be OK. (He was eyeing bed but wanted to be awake and alert if I had a stroke.)

Sure, I was OK. But I couldn’t stop pacing. Shaking my head. And weeping.

I slipped on my wool coat and sat on the porch. The air was cold. The sky clear. The stars in their places. Moon, too. The earth hadn’t shifted on its axis.

Deep breaths. And prayers of thanksgiving. God was seeing to it that my dream would be reality. Jerry Jenkins was the tool.

Johnny Cash’s “Why Me, Lord?” came to mind, reminding me my journey began in late 2006 when I stumbled across an essay contest online. Adam McManus, talk radio host on KSLR AM in San Antonio, together with one of his sponsors, Jerry B. Jenkins, was offering the Christian Writers Guild Conference to the winner.

It wouldn’t hurt to enter. I wouldn’t tell a soul, so I wouldn’t have to answer questions. I could write an essay about why I should attend the conference. I’d been dreaming secretly about writing illustrated children’s books.

Our daughter had carried (with great agony) and then delivered (at 28 weeks) a beautiful set of triplets (1 girl and 2 boys) in 2005. She had rejected the fertility doctor’s insistence that she abort one of the babies early on and had spent the better part of 21 weeks in the hospital experiencing every complication in the annals of “at-risk pregnancy.”

I wore my knees out in prayer. (Tweet That!) Daily when I arrived in the Neonatal Intensive Care Unit and heard “They’re doing OK” I whispered a prayer: “Thank you, Lord, for honoring Lynn Lee’s trust in Your care.” A year later, another boy came along. Four babies in diapers—not your everyday baby experience—requires extra applications of prayer.

Fast forward—past joining several writers’ organizations, critique submissions, conferences, workshops, contests, mentors, tossing aside one idea after another, starting and stopping, reevaluating and going at it again, and even throwing in the towel for 6 months. I’d had it!

Until one morning in April 2014 when I woke with a story on my mind. It wouldn’t let me go. I sat at my computer, opened a document, typed CHAPTER 1 … and began to weep.

The Kleenex box grew lighter and lighter—the way it does when it’s getting to the bottom and a quick yank throws it up over your head. That’s the picture.

At times I thought I felt Jesus beside me, whispering words every now and then, his finger pointing to a pathway, urging me to get my heart in tune—in rhythm—with His, the most precious moments in my writing life so far.

I did my best to edit the manuscript but on the last day before the deadline, I clicked “Submit” knowing it needed a lot of work. The consolation: The feedback would be valuable.

Did I expect the feedback I received on the following January 16? Absolutely not. Was I stunned and traumatized and unbelieving at first? Duh!

For whatever reason, the Lord chose this blessing for me. The story isn’t perfect, not by a long shot. But neither am I. By the Lord’s gracious hand, I was granted some ideas and words and the freedom to put them together as I chose. My ancestors’ experiences are tucked into the story, and readers see my heart and soul laid bare. Mainly, I hope they see Jesus.

Writers, if I can do this, YOU can. Don’t give up!

And, readers, when you open your next novel, pray for the writer. She might be gasping for breath!

All the believers were together and had everything in common.
Acts 2:44

One of the blessings of authorship is sharing with other authors. People I never would have met I now count among my friends. Take, for example, Clarice G. James, who was the 2nd place winner in the 2014 Jerry Jenkins Operation First Novel contest. Join us as we chat about her debut novel Double Header.

Hi, Clarice. Thank you for joining us today.

You learned at the Writer to Writer Conference last January that you were the 2nd place winner in the Jerry Jenkins Operation First Novel contest. How did you feel when you heard your name called? How and with whom did you first share the news?

Numb is the word that best describes how I felt–mainly because I’d been sick the whole weekend and had not slept much at all! The first chance I got, I called my husband–my biggest supporter.

What’s the story behind your award-winning novel? And when did the idea begin percolating? 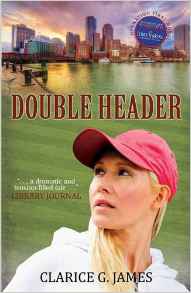 brother) fears losing the unblemished memories of her late father when she learns she has a half brother no one knew existed. In her search to identify this walking threat to her father’s reputation, she learns God’s playbook is less about her well-ordered plans and more about His.

Reviewers have labeled Double Header as “a mystery of the heart,” a humorous women’s contemporary, a “breezy romp,” and a “refreshing change from the usual chick-lit.” Which of these descriptors comes closest to your own?

Definitely not a breezy romp. It does have humor and a bit of mystery, but I think a “refreshing change from the usual chick-lit” is a more apt description. 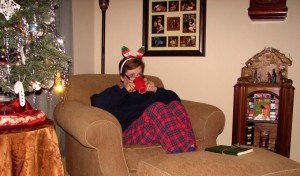 On your website you quip, “First I change your name. Then I put you in my book. What happens to you next depends on whether I’ve had my coffee.” (Tweet That!) Are there people in your life or past who might recognize themselves in Double Header?

My daughter and three of my friends have all said the protagonist, Casey Gallagher, reminds them of themselves–all for different reasons. I definitely utilized my daughter’s work ethic, athletic interests, and relationship with me to develop Casey. I also incorporated my two sons’ back and forth humor and wisecracking. But some of Casey’s control issues are more me than anyone else.

I smiled and sometimes chuckled as I read your bio on your website. One reviewer referred to the “snappy repartee” between characters Casey and Griffin; another, to their “humorous bantering.” Have you always viewed the world through a lens of humor?

Yes, my brain automatically goes there–even when it’s not totally appreciated or appropriate. If I can make someone laugh, we both feel better. (Tweet That!)

Tell us about baseball’s connection to your life. Are you a lifelong fan of baseball or sports in general? Did you interview professional baseball players for Double Header? What other connections exist between your life and this story line?

As a child, the only person I knew who liked to watch baseball on TV was my paternal grandfather. And since he always fell asleep during the game, I assumed it was boring. Any connection to or interest I have in baseball or any other sport came much later through my husband and children who are avid fans. I didn’t interview professional baseball players, but I read a lot of blogs, did a lot of online research, and then ran my “facts” by those I knew would correct me if I was wrong.

I grew up on Cape Cod, and my daughter lives in Plymouth, so I know the area. When I was a teenager, my sister and I would go to the Cape Cod Minor League Games, more to see the cute college boys than to follow the game.

Thank you for sharing your story with us. Where can readers learn more about you and your special brand of fiction?

Find me on my website, www.claricejames.com. I blog from there weekly, too. You can also catch me on Facebook, Twitter, LinkedIn, Pinterest, and GoodReads. Thanks for the opportunity, Linda! I look forward to reading the 1st place winner: The Calling of Ella McFarland.

Readers, next week I’ll interview the 3rd place winner of Operation First Novel, Christy Brunke, author of Snow Out of Season. Subscribe to this blog so you won’t miss it!

Lord, we pause to thank You for the gift of sharing. Where would we be without it? In poverty of spirit. Lonely. Discouraged. And afraid. Teach us to share better tomorrow than we did today. For Jesus’ sake. Amen