When one of the Pharisees invited Jesus to have dinner with him, he went to the Pharisee’s house and reclined at the table. A woman in that town who lived a sinful life learned that Jesus was eating at the Pharisee’s house, so she came there with an alabaster jar of perfume [perfumed oil]. As she stood behind him at his feet weeping, she began to wet his feet with her tears. Then she wiped them with her hair, kissed them and poured perfume on them.
When the Pharisee who had invited him saw this, he said to himself, “If this man were a prophet, he would know who is touching him and what kind of woman she is—that she is a sinner.”
Jesus answered him, “Simon, I have something to tell you.”
“Tell me, teacher,” he said.
“Two people owed money to a certain moneylender. One owed him five hundred denarii,[c] and the other fifty. 42 Neither of them had the money to pay him back, so he forgave the debts of both. Now which of them will love him more?”
Simon replied, “I suppose the one who had the bigger debt forgiven.”
“You have judged correctly,” Jesus said.
Then he turned toward the woman and said to Simon, “Do you see this woman? I came into your house. You did not give me any water for my feet, but she wet my feet with her tears and wiped them with her hair. You did not give me a kiss, but this woman, from the time I entered, has not stopped kissing my feet. You did not put oil on my head, but she has poured perfume on my feet. Therefore, I tell you, her many sins have been forgiven—as her great love has shown. But whoever has been forgiven little loves little.”
Then Jesus said to her, “Your sins are forgiven.”
Luke 7:36-48 (NIV)

I’m that woman. I’m that in need of Jesus. I’m that grateful.

When my brothers and I were growing up and something broke or stopped working, we could always count on one response from our mother: “All it needs is a dab of oil.” (Tweet That!)

We’d groan and continue tinkering with whatever was broken, determined not to give credence to her comment. How silly to think a dab of oil would fix anything.

Looking back I couldn’t count the times Mother was exactly right. There was the bicycle chain. The frozen doorknob. The castoff pair of pliers. And, most memorable of all, the 16mm movie projector that stopped mid-movie.

Daddy tried to get it going. Brothers added their two bits.

“All it needs is a dab of oil,” Mother insisted.

We all groaned while the men tried their hands at the frozen parts–again.

Meanwhile, Mother found her trusty little can of oil and returned. “Try this.”

Mother dipped the tip of the can into the projector’s innards. Squeezed. And stepped back. “Try it again.”

A collective sigh and groan. But a push of a button later …

The film advanced. The projector projected. Lo and behold … there on the screen … the movie continued.

Mother slipped from the room, muttering, “Told you all you needed was a dab of oil.”

Decades later I often think of that little can of oil. I think of it when I’m reading Luke 7 also. (Tweet That!) 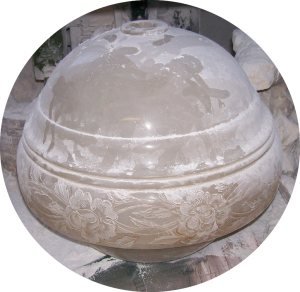 The sinful woman was broken. She couldn’t go on. So she crumbled at Jesus’ feet. She pulled out her version of Mother’s little oil tin–an alabaster jar of perfume and anointed His feet with the costly oil.

Something tells me the sweetest aroma came from her tears. And even now He feels them on His feet. (Tweet That!)

According to the Savior, her story of gratitude for the burden of sin Jesus lifted would be told for years to come.